Want to Stop the Next Pandemic? Start Protecting Wildlife Habitats 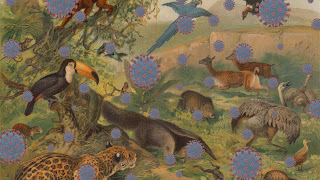 When animals have room to roam, they don't pass infections to humans.

The assault on ecosystem that allowed Covid-19 to jump from animals to humans went far beyond merchants hunting and selling rare wildlife. Biodiversity- that is, the health of the entire ecosystem-can restrain pathogens before they ever leave the wild.

"Virus spillover risk" from wildlife to people rises as contact increases between them, according to  recent research published by a team of researchers led by Christine Kreuder Johnson of the One Health Institute at University of California , Davis. Almost half of the new diseases that jumped from animals to humans ( called zoonotic pathogens) after 1940 can be traced to changes in land use, agriculture , or wildlife hunting. SARS , Ebola, West  Nile, Lyme, MERS, and others all fit the profile. There may be 10,000 mammalian viruses potentially dangerous to people.

Recent research has given more support to the idea that biodiversity protection in one part of the world can prevent novel diseases from emerging and leaping into another.