The Pandemic Is Not a Natural Disaster 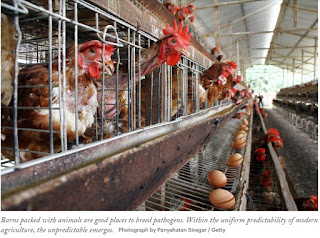 Zoonotic diseases can seem like earthquakes; they appear to be random acts of nature. In fact, they are more like hurricanes—they can occur more frequently, and become more powerful, if human beings alter the environment in the wrong ways. The Centers for Disease Control and Prevention estimates that three-quarters of the “new or emerging” diseases that infect human beings have originated in wild or domesticated animals.⁠ In addition to the familiar pathogens—Ebola, Zika, avian flu, swine flu—researchers have counted around two hundred other infectious diseases that have broken out more than twelve thousand times over the past three decades.⁠ It’s no small feat to cross the species barrier; these numbers speak to the scale of our agricultural system.

Infectious diseases are only one aspect of a larger, ongoing health emergency. Two-thirds of cancers have their origins in environmental toxins, accounting for millions of annual fatalities; each year, 4.2 million people die from complications of respiratory illnesses caused by airborne toxins—forty-five thousand in the U.S. alone. Marshall Burke, an assistant professor of earth systems at Stanford, has estimated that the reduction in pollution from the shutdown of factories in Wuhan has saved between fifty-one and seventy-three thousand lives in China–twenty times more people than the virus has killed in Hubei Province as of March 8th. ⁠“We have created a set of dangerous environments, and we can’t just keep imagining that we can exclude them or put them elsewhere,” Anna Tsing, an anthropologist at the University of California, Santa Cruz, told me. The big lesson of the virus, she said, is that “there is no place to run.” In an effort to expand our reach across the planet, we have cornered ourselves.

The sars-CoV-2 pandemic is an unfolding, global tragedy. It’s also an occasion for thinking, in broad terms, about the currents in which we swim.