There are three type of novel coronavirus; type A is closest to the one found in bats and pangolins 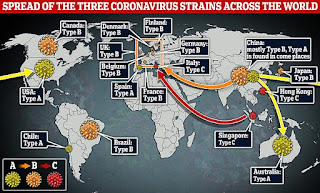 There are THREE distinct strains of the novel coronavirus in the world and while china's epidemic was driven by an early mutation that quickly spread in the UK, the US is suffering from an original variation.

Type A is closes to the one fond in bats and pangolins and has two sub-clusters.
One sub-cluster linked to Wuhan and the other is common in US and Australia .
Type B is derived from type A and has become the most prevalent in Wuhan.
Type C is the 'daughter' of type B and was spread to Europe via Singapore.


Three types of the deadly coronavirus are spreading around the world - and the US is being rocked by the original strain from China.

Cambridge University researchers mapped the genetic history of the infection from December to March and found three distinct, but closely related, variants.

Analysis of the strains showed type A - the original virus that jumped to humans from bats via pangolins - was not China's most common. Instead, the pandemic's ground-zero was mainly hit by type B, which was in circulation as far back as Christmas Eve.

Results showed type A was the most prevalent in Australia and the US, which has recorded more than 400,000 COVID-19 cases. Two-thirds of American samples were type A - but infected patients mostly came from the West Coast, and not New York.

Dr Peter Forster and team found the UK was mostly being bombarded with type B cases, with three quarters of samples testing as that strain. Switzerland, Germany, France, Belgium and the Netherlands were also dominated by type B.

Another distinct variation, type C, descended from type B and spread to Europe via Singapore.