Mangrove forest and its role to save people from cyclone 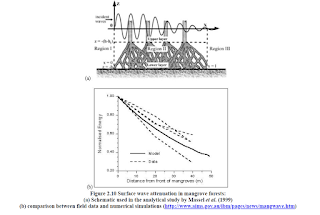 According to recent news, in the evening 20 May 2020, cyclone hit West Bengal, India , killing at least 12 people and causing damage that will go into billions of dollars when added up. The authorities had moved over 200,000 people from the coast into shelters before the cyclone reached the coast. That however, created a complication, because these shelters were already being used as Covid-19 quarantine centres, and now people are squashed in them without any prospect of keeping enough distance to avoid infection, though all have been given masks and asked to wear them at all times. That speed went down to around 130 kmph by the time Amphan reached Kolkata, 100 kilometres inland, but was still strong enough to destroy thousands of uncemented buildings, uproot thousands of trees, turn all roads into raging torrents and short-circuit transformers all over the metropolis though the authorities had switched off power.

Without the barrier from trees , the speed of wind could be even stronger!

According to the news from India Climate Dialogue in the article “Sundarbans mangroves save bengal from Cyclone Bulbul on Nov 13, 2019 , The Sundarbans reduced the wind speed of Cyclone Bulbul by 20 kilometres an hour and – at its own expense – saved the rest of southern Bengal from the fury of the storm. The cyclone that had formed in the Bay of Bengal hit the Sundarbans coast late in the evening of November 9 with winds gusting up to a speed of 130 kilometres per hour. But as it moved parallel to the coast – eastwards towards Bangladesh – the world’s largest mangrove forest impeded the wind, proving yet again the importance of mangroves in safeguarding coasts from storms that are becoming increasingly more frequent and more severe due to climate change. The Sundarbans did have one natural ally this time – it was low tide when the cyclone made landfall. So, the wave heights were significantly lower than they had been during the 2009 Cyclone Aila. The landfall of the earlier cyclone during high tide had meant the destruction of many more embankments in 2009, though the maximum wind speed at that time had been lower than with Cyclone Bulbul.

How can the mangrove save people from Cyclone?

Mangroves trap and stabilize sediment and reduce the risk of shoreline erosion because they dissipate surface wave energy. It is this attribute that makes mangroves a potential natural solution for particular coastal protection problems. Field observations of surface wave attenuation in mangrove forests were undertaken in both Townsville, Australia and on Iriomote Island, Japan. High resolution wave gauges were deployed throughout the mangroves along transects in line with the dominant direction of wave propagation. Data were gathered to verify a numerical model of wave attenuation. The numerical model was based on the fact that surface waves propagating within a mangrove forest are subject to substantial energy loss due to two main energy dissipation mechanisms: (1) multiple interactions of wave motion with mangrove trunks and roots; and (2) bottom friction. The dissipative characteristics of the mangrove forest were estimated from physical parameters such as trunk diameter, spatial density and vegetation structure, which were not necessarily vertically and horizontally uniform. The resulting rate of wave energy attenuation depended strongly on the density of the mangrove forest, the diameter of the mangrove roots and trunks and on the spectral characteristics of the incident waves. (Hermann & Chris, NA from Paper Role of Forest and trees in protecting coastal areas against cyclones, foa.org )

In order to significantly reduce the impact of the storm surge —usually the most devastating cyclone hazard — several kilometres of coastal forests are required. Mangroves are more efficient at attenuating surface waves and wind as well as providing protection against erosion. (Hermann & Chris, NA from Paper Role of Forest and trees in protecting coastal areas against cyclones, foa.org )

More reading: Role of forests and trees in protecting coastal areas against cyclones